Living in a Virtual World: The Digital Aesthetic of Contemporary Painting | Limna
May 12 • Art Data • Words by Lydia Figes

Living in a Virtual World: The Digital Aesthetic of Contemporary Painting

After a period of decline, there has been a revival of figurative and abstract painting in the last decade. As a new generation of artists turns towards digital technologies, we consider the rise and presence of the ‘digital aesthetic’.

In a world of virtual reality, we might ask: how has the visual vocabulary of the internet and digital technologies shaped contemporary painting? In recent years, artists have developed an aesthetic that emulates digital culture, that could be described as ‘low-culture’ (if such a category can be said to exist today). The revival of painting coincides with the prosperity of the art market, which has consistently valued two-dimensional works over other artistic mediums that are more difficult to sell, store, and transport. But the resurgence of painting is also synonymous with the omnipresence of the internet; it is easier to reproduce and disseminate online images of two-dimensional works.

The practice of manipulating digital images to create art has a longer historic precedent. For example, the conflation of humans and machines in the work of Paul McCarthy, the products of consumerism and advertising in the works of Andy Warhol and Barbara Kruger, or the out-of-focus paintings of photographs by Luc Tuymans. One could argue that the Post-Impressionist movement of Pointillism, developed by Georges Seurat at the end of the 19th-century anticipated the contemporary digital aesthetic. His pixelated compositions – splitting pigments into separate dots and daubs of paint – echoed developments in early photo-mechanical printing. 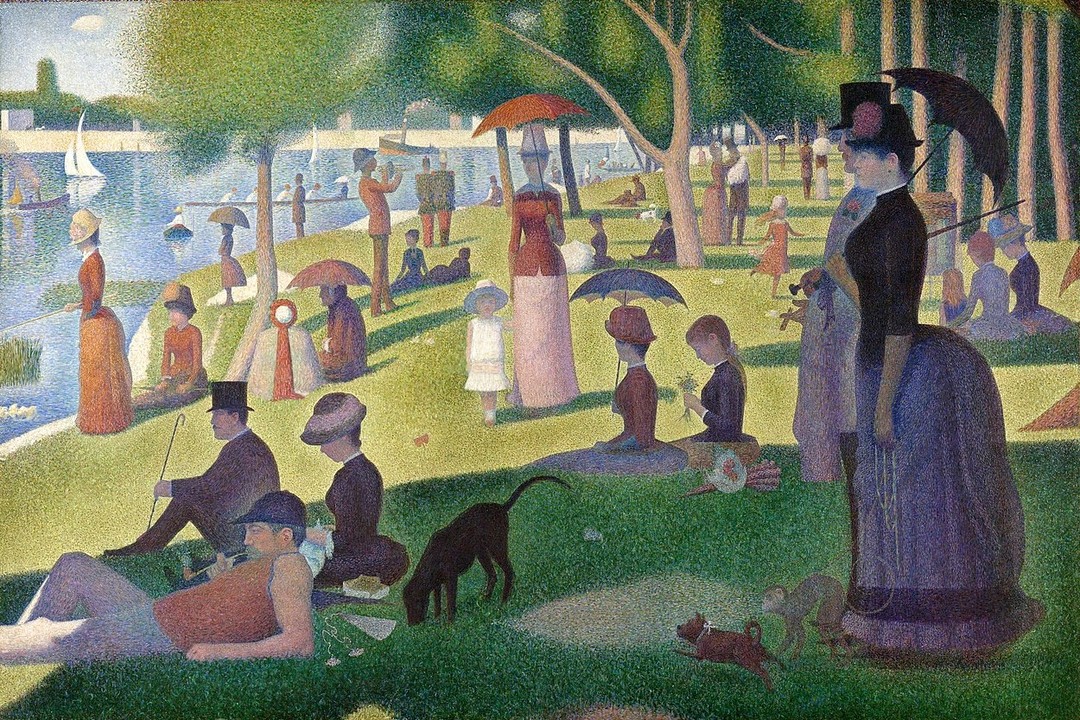 Debates about the demise of painting persisted throughout the 20th century, with theorists such as Douglas Crimp writing his text ‘The End of Painting’ in 1981. According to Crimp, a revival of painting in the early ‘80s – after a period of abandonment in favour of minimalism and conceptualism – relied on “reinvesting those strokes with human presence”. In short, painting needed to reconnect with the artist’s hand, rather than continue the mechanical processes of photography and video.

But painting in the 21st century has become more entwined with technology than ever. As Claire Bishop wrote in ArtForum: “Most art today deploys new technology at one if not most stages of its production, dissemination, and consumption.” Photography, printing and software such as Photoshop and InDesign have become commonplace amongst artists. The growing commercial demand for a digital, tech-inspired aesthetic, partially culminated in the contemporary craze of digital non-fungible tokens (NFTs).

Painting in the 21st century has become more entwined with technology than ever.

One of the most prominent artists to champion technology in his work, Wade Guyton, is known for his computer-generated works that embrace Epson inkjet printers and other everyday technologies such as iPhones. In 2012, he opened a solo show at the Whitney Museum of American Art, titled ‘Wade Guyton OS’, (for ‘Operating System). Writing for Vulture, the critic Jerry Saltz declared that by using a printer, Guyton had “invented a new paintbrush”, while the Whitney curator Scott Rothkopf noted that the artist “had figured out a way to make work that deals with technology but doesn’t feel tricky or techie, rather it’s intuitive.” Setting a new artistic precedent, Guyton coalesced the mechanical and the subjective in his paintings, inspiring other artists to embrace the digital. 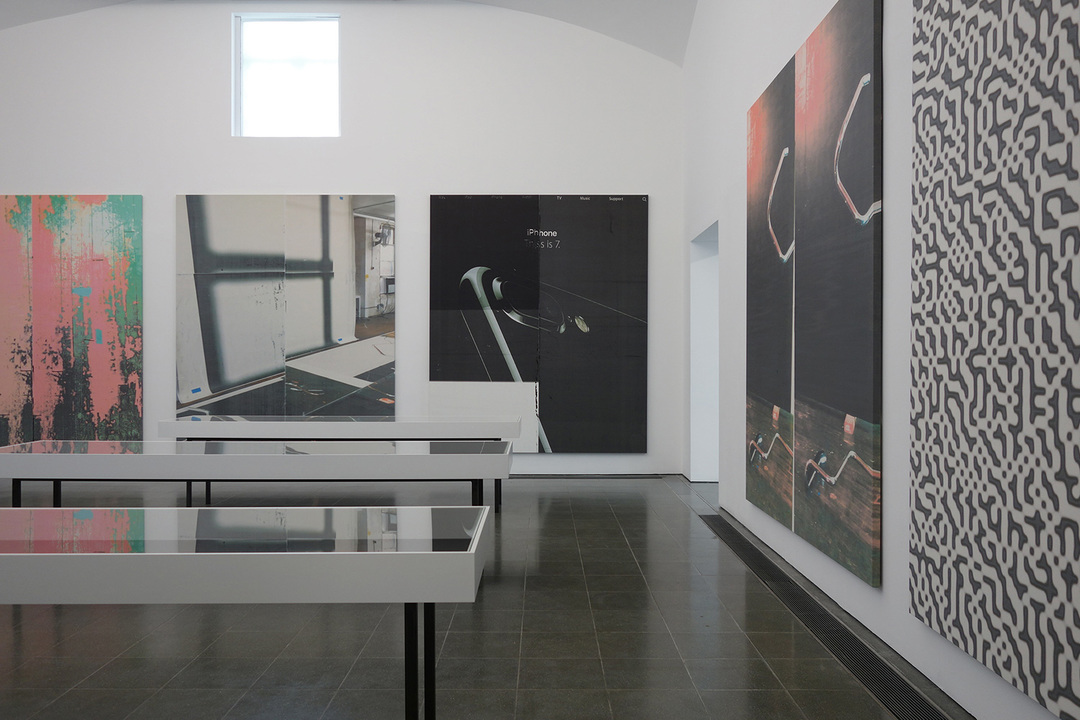 But is it possible to define a ‘digital aesthetic’ today? Unlike Guyton, many artists disguise the artificial processes and digital interventions behind their work. Instead they prefer to maintain the idea that painting is directly connected to reality, or the artist’s ‘aura’, as once outlined by Walter Benjamin in ‘The Work of Art in the Age of Mechanical Reproduction’(1935). But swathes of Ultra Contemporary painters self-consciously acknowledge the influence of the digital in their work. This recalls Jeffrey Deitch’s prophecies in his catalogue essay for his touring ‘Post Human’ show in 1992: “This new figurative art may actually mark the end of Realism rather than its revival.” Deitch argued that artists today can’t claim to represent the ‘real’ when so much of our world has become artificial.

Mirroring the online world, these artworks feel as if they are seen through a filter or projected onto a computer interface. They take on the stylistic qualities of the virtual: saturated, pixelated, out-of-focus or distorted.

One might loosely define the digital aesthetic as an appropriation of algorithmic visual culture, and the forms of labour and thinking associated with late capitalism. Mirroring the online world, such artworks feel as if they are seen through a filter or projected onto a computer interface. They take on the stylistic qualities of the virtual: saturated, pixelated, out-of-focus or distorted. 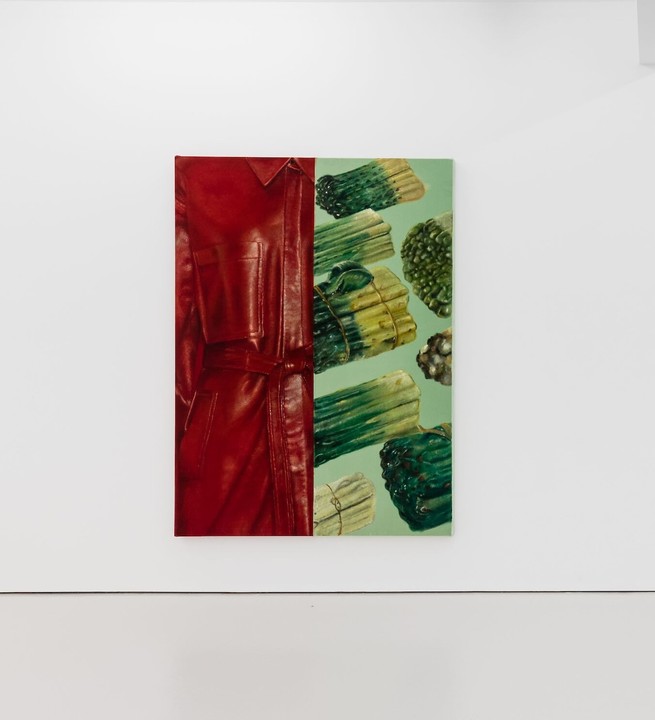 Take for example the paintings of the London-based artist and musician Issy Wood. She paints banal objects of material culture in a hyperreal, claustrophobic and cropped manner, evoking the visual language of Instagram ads or billboard advertisements. Conveying an amplified sense of artifice (heightened because she paints on velvet) she alludes to the transience and excess of online consumer culture that constantly surrounds us we refresh our social media feeds.

Other examples of commercially-successful painters embracing a digital aesthetic include the Nigerian-born, LA-based artist Njideka Akunyili Crosby. Her photo-collage paintings transfer photographs or imagery from popular magazines. By spending a lot of time online to source images, her work captures a hybrid aesthetic of disparate identities via cultures of digital image-making.

Figurative painters such as Jonas Wood create works that are evocative of the digital through their graphic and geometric flatness, in which blocks of colour recreate the pixelated structure of photographs. Like Wood and Crosby, the artist’s primary reference point is the internet; he admits to appropriating images from photographs found online or social media. Similarly, the abstract painter Fiona Rae incorporates figurative elements derived from digital life – colourful graphic motifs of floral forms or cut-outs of cartoon animals. By converging the traditional medium of painting with visual mementos derived from the internet and TV culture, Rae breathes new life into abstraction – “I never think of painting as old-fashioned. I mean, in a way TV is old-fashioned, and video is old-fashioned.”

Pushing painting to another dimension, Gina Beavers’ three-dimensional paintings appropriate stock photos found on the internet of make-up tutorials, celebrities, or social media posts under the hashtag #foodporn. Her compositions protrude obscenely into the viewer’s space, as red-stained brushes smear lipstick-cum-paint onto plumped lips. In It’s Gonna Be May, the face of Justin Timberlake repeats and fragments like a buffering webpage. Her self-reflexive work is a tactile synthesis of corporeal object and digital image, albeit one that refuses to conform neatly into one traditional medium.

It’s Gonna Be May, 2019, Gina Beavers, acrylic on linen on panel Courtesy of the artist and Marianne Boesky Gallery, New York and Aspen. © Gina Beavers

The omnipresence of the digital aesthetic speaks to the experience of living in a virtual world, one in which reality is often augmented and distorted. Numerous artists today attempt to articulate this surreal experience, indicating that there is no longer a distinct separation between the digital and the real. For better or for worse, the internet has become a rich artistic tool, functioning as the painter’s subject matter and lens through which they make sense of the world, while mirroring it back to contemporary audiences.

Discover new artists, artworks and insights by clicking on the ⚖️ emoji. The Limna app is first AI-powered art advisor for art lovers and galleries.