What are you laughing at? The way humour can be used by artists to challenge the status quo | Limna
May 13 • Art Data • Words by Philomena Epps

What are you laughing at? The way humour can be used by artists to challenge the status quo

Stretching back millennia, humour has been used as a tool to address socio-political issues and it still remains an important avenue for contemporary artists to express themselves today. Here, we look at some of the ways comedy has been used to challenge the status quo.

The relationship between art and comedy has endured throughout the centuries. Since the comic poets of ancient Greece, humour has been used as a tool to share divergent views or raise socio-political awareness. Comedy has become a means in which to disrupt authority through an act of social transformation, with the most radical opinions often disguised behind playful behaviour or through the provocation of laughter. The psychoanalyst Sigmund Freud theorised the transcendent power of humour as a mechanism of defence against potential suffering, and as part of a satisfying social process in which one could overcome their inhibitions. In Jokes and Their Relation to the Unconscious (1905), he suggested that “[a] joke will evade restrictions and open sources of pleasure that have become inaccessible”.

An understanding of humour as fundamentally ideological is crucial, in order to laugh one has to be able to recognise what one is laughing at.

As with any joke, the issue of context is important in the practice of contemporary artists who use humour as their modus operandi. An understanding of humour as fundamentally ideological is crucial - in order to laugh one has to be able to recognise what one is laughing at. Strategies of irony, caricature, parody, taboos, innuendo, witticism and satire have been harnessed by visual artists throughout the history of art to talk about a range of issues, with each generation uniquely responding to their own psychology and contemporary set of concerns.

In an age of climate crisis, democratic breakdown and societal rupture, the necessity of humour as a source of both pleasure and politics, and therefore as an avenue for contemporary artists to express themselves, will undoubtedly endure. Here, we look at some of the ways humour has been used to challenge the status quo. 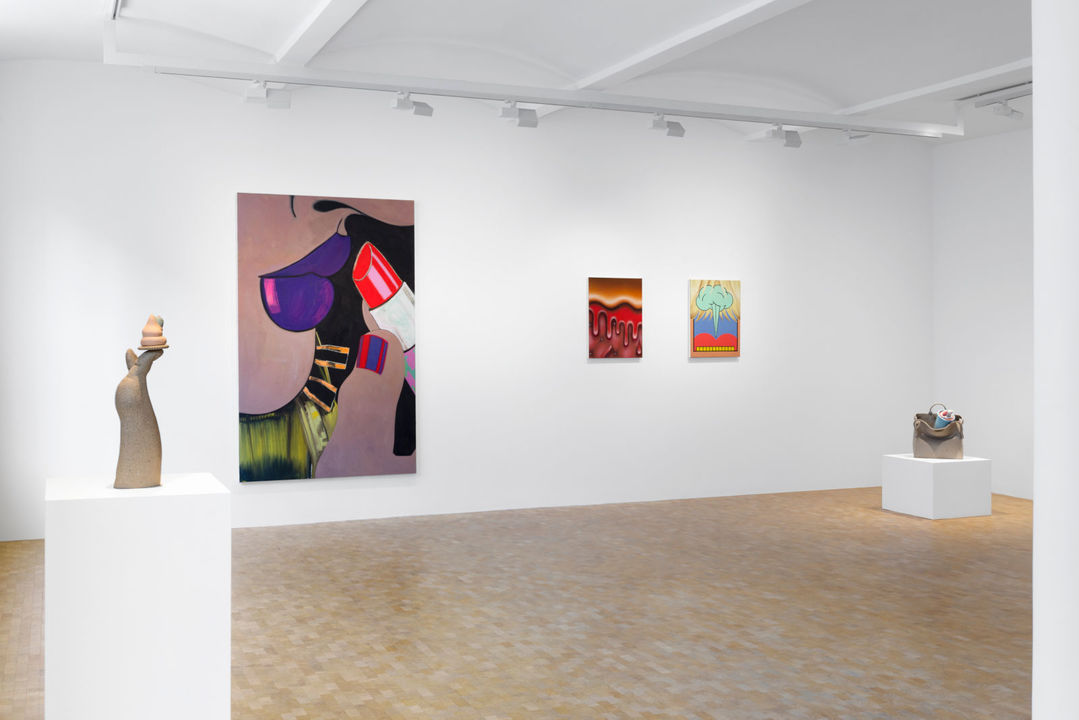 The Artist’s Joke, The Whitechapel Gallery, 2007

In 2007, The Whitechapel Gallery published The Artist’s Joke, edited by Jennifer Higgie, as part of their ‘Documents of Contemporary Art’ series. The book surveyed the role of humour by avant-garde and contemporary artists over the last century, moving from the worlds of the Dadaists and Surrealists, figures like Marcel Duchamp and Hannah Höch; the use of cartoons and comic strips in Pop art; the 1980s text-based work made by Barbara Kruger and the Guerilla Girls; the use of nightmarish and grotesque imagery in work by Bruce Nauman, Mike Kelly, Paul McCarthy; the scenarios drawn by Raymond Pettibon and David Shrigley, among countless others.

Organised in collaboration with the artist Ryan Gander, the exhibition brought the work of well-known figures like Maurizio Cattelan, Sarah Lucas, Joyce Pensato, Ugo Rondinone, and Bedwyr Williams, into conversation with younger, emerging practitioners experimenting with the device of humour, like Simeon Barclay, Danielle Dean, and Hardeep Pandhal. Barclay and Pandhal also recently featured in the Somerset House group exhibition, Beano: The Art of Breaking the Rules, in which the legendary comic was used as a creative springboard to unite a selection of artists motivated by a shared sense of mischievous rebellion.

In an age of climate crisis, democratic breakdown and societal rupture, the necessity of humour as a source of both pleasure and politics, and therefore as an avenue for contemporary artists to express themselves, will undoubtedly endure.

Critic and poet Barry Schwabsky curated a small selection of paintings and sculptures by Genesis Belanger, Ellen Berkenblit, June Leaf, and Emily Mae Smith for a show at Pippy Houldsworth Gallery, which he titled Dark Laughter. In the accompanying exhibition text, Schwabsky wrote that the collective “work arouses dark laughter thanks to their acerbic view of the world we share, and against which they quietly rebel.” Belanger explained that her exhibited sculpture, A Woman Is Always Prepared (2019), was loosely inspired by the political situation in the UK. “It seemed a missed opportunity to not at least acknowledge Brexit. I read about protesters throwing milkshakes at political party members … I thought this was absolutely hilarious and awfully dark. I made the bag (a Fendi Peekaboo bag) with the milkshake imagining a lot of people may feel the impulse to throw a shake at someone during this moment.”

Eschewing sardonic attitudes in favour of scatological humour and vulgarity is the practice of Tala Madani, who has examined power, gender and identity through the farcical and the grotesque, staging environments in her paintings and animations where anonymous men engage in a roster of lewd or violent behaviours. Turning to ideas of motherhood for her recent exhibition, Madani showed the Shit Moms series, in which the female form has been replaced by a dripping, leaky pool of excrement. In the Shit Mom animation, the figure drifts with ennui through her domestic interior, her viscous body staining the surfaces and furniture, and eventually tries and fails to successfully masturbate. The comic relief is found within the intersection between humour, abjection and an almost voyeuristic level of overfamiliarity.

Ebecho Muslimova is similarly drawn allure of the absurd and the playfully perverse, utilising levity, irreverence, and disgrace to disrupt societal conventions. Akin to slapstick or character comedy, Muslimova’s caricatured alter-ego Fatebe appears throughout her paintings, drawings and murals, with the caricature’s naked, exuberant body able to stretch and metamorphose to suit various unpredictable and provocative occasions. 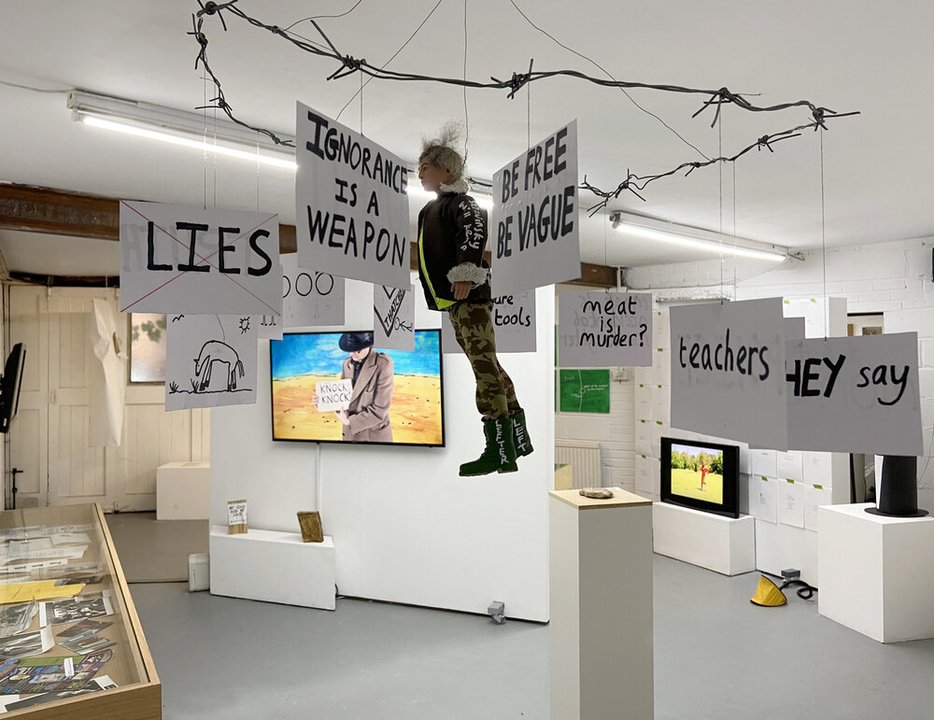 Simon Munnery, What Am I?, Stroud Valleys Artspace,2021

Simon Munnery, What Am I?, Stroud Valleys Artspace, 2021

The Beano show was curated by the artist Andy Holden. In 2021, he also hosted an exhibition of comedian Simon Munnery’s paintings, videos, and archival material at SVA in Stroud. The idea of the show was initiated by a review of Munnery’s Edinburgh stand-up that one critic had claimed was “the closest comedy gets to modern art”. Holden decided to take that on face value, suggesting that, through seeing the exhibition, “[visitors can] decide for themselves if his eclectic, profound, and humorous endeavours can be considered art, or not … Death, pretentiousness and politics are all scrutinized for jokes, but in the humour something else seeps out, and perhaps that something could be ‘art’.”

The historic estate Mottisfont staged an exhibition exploring the role of satire in political commentary and cartoons, showing a host of illustrations published in newspapers and magazines from the 1800s to the present day.

Earlier this year, Pace Gallery launched the online group show Twenty-One Humors, with work from 20 artists—including Elmgreen & Dragset, R. Crumb, Sadie Laska, and Jayson Musson—who look towards “wry and dark humour, conveying uncomfortable truths about the human condition and contemporary life.” Speaking to Pace Journal on the role of cynicism and sarcasm in her practice, Laska remarked: “I’ve used humour to try to digest and manage the stress that we’ve all lived through with the pandemic and the Trump administration as well as underlying anxieties about climate change.” 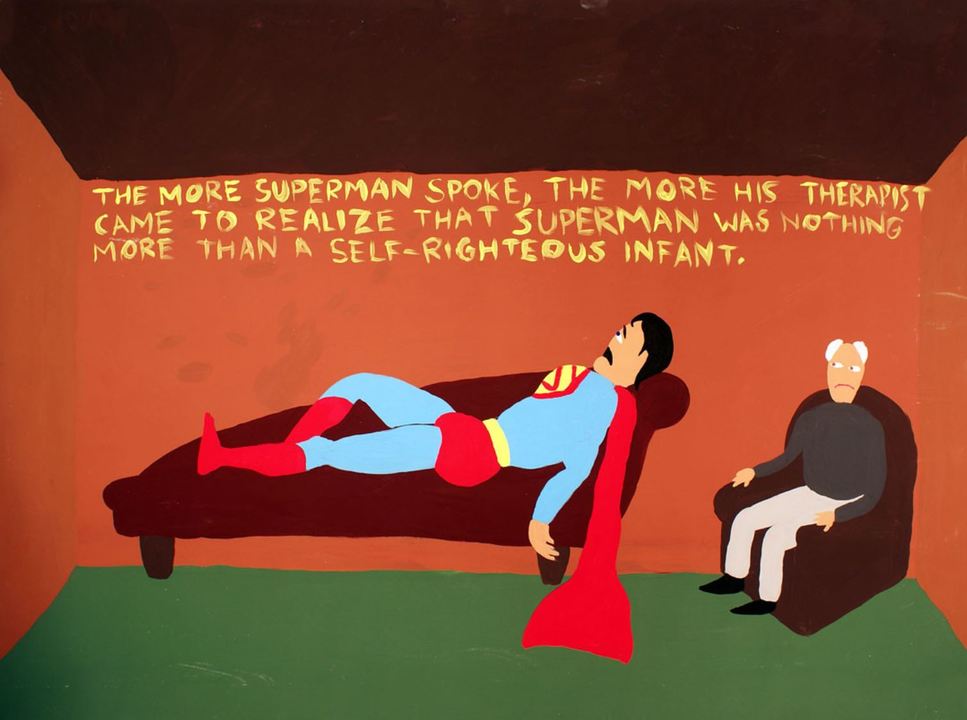